Posted at 22:55h in Blog, Featured by Elaine Glusac

Lunch service is winding down at Bank Lane Bistro in suburban Chicago when chef John des Rosiers greets two uniformed firemen who have come, not to inspect the potential hazards of the kitchen’s wood-burning oven and flaming gas range, but to pick up kitchen knives and a few tips.

Beginning in 2004, when an acquaintance expressed interest based on his rotating duties as firehouse cook, des Rosiers hatched a plot to voluntarily teach the firefighting frontline good cooking that they could practice in the station house.

“I wanted to give something back to the community,” says the energetic 27-year old, who once a month invites area firemen – one or two at a time – to shadow him in the restaurant kitchen. “These guys are true heroes and the least they deserve is some tasty, healthy food.”

Reporting for training, Dan Berman and Rich Meierdirks, both of the nearby Northfield Fire Department, say cooking for the crew is more healthful and economical. Meals there, prepared on a small stove and an outdoor gas grill, lean to comfort food classics. “The stationhouse rules are, it’s go to be hot, there’s got to be lots of it and it’s got to be relatively inexpensive,” says Berman, who is fond of jambalaya and stews at work. Meierdirks favors slow cooking dishes like osso buco.

The firemen assist the chef for four hours as he prepares items for the dinner service. On the menu: herb marinated roast chicken, olive oil whipped potatoes, roast pork tenderloin, polenta with wild mushrooms and champagne vinaigrette for the green salad. “This is all easy stuff that’s really good and tasty,” says Des Rosiers, grabbing produce from the walk-in cooler. “And it’s resilient. Most of it can be prepped ahead of time and reheated come meal time.”

That’s important, say the firemen, who work eight hour shifts and never know when an emergency will send them racing away from the stove. Both men have experience cooking, but des Rosiers’ lessons are largely new to them. After beating together the salad dressing made with champagne vinegar, shallots, Dijon mustard, honey, egg yolks and extra virgin olive oil, the chef places it in a pour bottle. “As long as you don’t add the oil in too fast the dressing won’t separate and it will keep in the fridge for weeks.”

So far the lesson is devoid of recipes. “I go by taste, not measurements,” he says, eliciting knowing nods from his recipe-averse audience. (Des Rosiers may cook to taste as a habit, but he offers recipes for the dishes here).

Peeling spuds to make mashed potatoes, one slips from Berman’s hand. Des Rosiers throws it out. “That’s the difference between here and the firehouse,” laughs Berman. “We’d pick it up and wash it off.”

Des Rosiers’ speedy trick for the side dish is to peel, halve and slice Idahos to one-quarter inch thickness. “That way they all cook at the same rate. If you boil them in chunks the outer potato, which is cooked, will absorb water while the inner potato cooks. This way you have drier, lighter results.” He demonstrates using a ricer to grind the potatoes then folds in extra virgin olive oil and warmed cream for fluffy results.

Training on the Job

Despite a degree from the Culinary Institute of America, des Rosiers says he picked up most of his best lessons in the kitchen too. Working the “amuse-bouche” station at the celebrated Charlie Trotter’s in Chicago, making pre-meal morsels to wet the appetite, he says, “I learned more there in five months than I did in half my career.”

That career started in high school when he made salads at a nearby fine dining restaurant. “I got interest in food from my Polish grandmother who cooked a lot. I grew up around it and loved it.” He decided, as a junior, that he wanted to be a chef and enrolled in the CIA at age 18, graduating at 20. Several restaurant stints later, des Rosiers runs not only Bank Lane Bistro but sister restaurant South Gate Café and a bakery on the premises, all largely French but with an American streak. Ironically the 1901 vintage building that is home to them all began life as a firehouse.

His food philosophy, which drives considerable repeat business in the Lake Forest community, is “well-sourced food, painstakingly prepared.” To that end he sets Meierdirks to chopping fresh herbs for the chicken marinade, saying, “You could never get that aroma and flavor from dried herbs.” He also boosts his mushroom polenta with a dash of porcini powder, available at fine spice stores.

The chicken roasted, the potatoes whipped, the salad tossed, the polenta cooked, the chef leads his charges to an elegant, linen-covered table by the window. “Enjoy!” he says, placing the platters down. The chicken, polenta and potatoes go over big with the students who vow to prepare them back at the station.

The chef meanwhile excuses himself from the feast. “I’ve got a private party for 30 tonight and I’ve got to run,” says des Rosiers, as he dashes back into the kitchen. “I eat after all the customers do.” 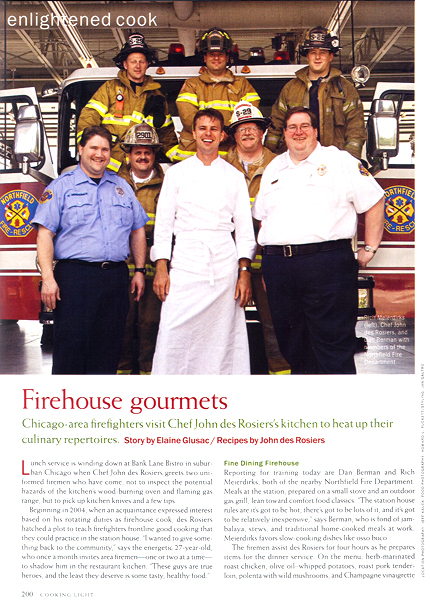